Grab a Fork and Knife: An Approach to Treating Rosacea 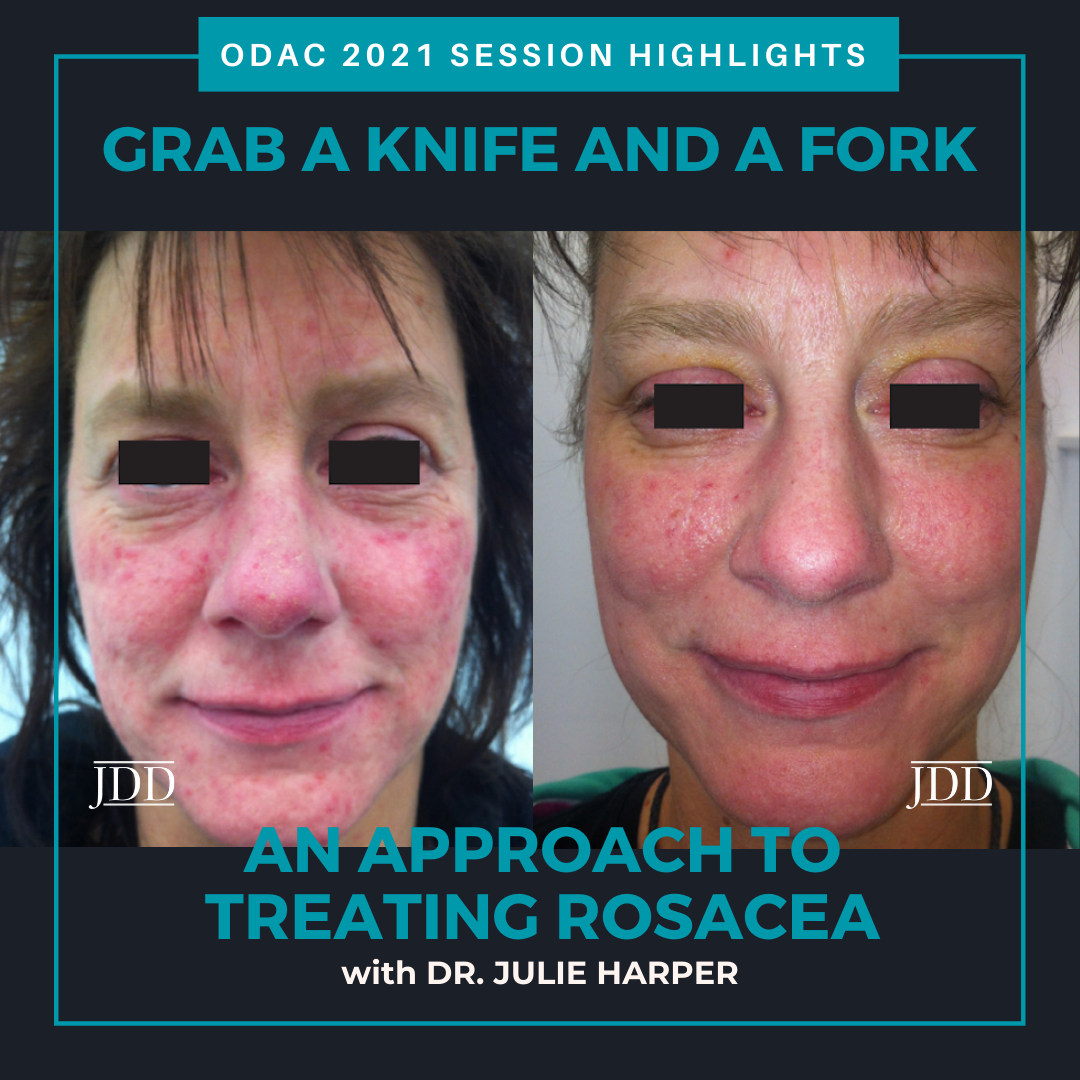 For most dermatologic conditions, my mantra for treatment tends to be “less is more”. I prefer to use the fewest number of creams, pills, and steps to achieve the best results. However, after watching this year’s ODAC Sneak Peek Inflammatory Diseases Symposium, I may have a new mantra for treating my rosacea patients – “forks, spoons, and knives”.

At the ODAC 2021 Pre-Conference Sneak Peek Inflammatory Diseases Symposium, Dr. Julie Harper, dermatologist at the Dermatology and Skin Care Center of Birmingham and Founding Director of the American Acne and Rosacea Society, built a case for use of combination therapy for rosacea.  It is well known that there are four subtypes of rosacea – erythematotelangiectatic, papulopustular, phymatous, and ocular. However, most patients don’t fall into one subtype, but rather, many experience subtype overlap. This is why Dr. Harper believes that clinicians should “start subtyping lesions” and treat all the lesions that are observed, even if that means use of multiple therapeutic agents.

Not only are there multiple targets clinically, but treatment for rosacea can also be targeted on a cellular level. The role of innate immunity including cathelicidins, specifically LL-37, and toll-like receptor 2 induction via demodex has been described in the pathogenesis of rosacea. But did you know that many of the well-known triggers of rosacea such as heat, stress, exercise, and spice have been implicated to affect rosacea on a cellular level? I certainly didn’t! Dr. Harper explained that common triggers of rosacea cause neurogenic inflammation via induction transient receptor potential channels to release substance P and calcitonin gene-related peptide, which cause vasodilation.

To better understand therapeutic options, Dr. Harper compares the various treatments to utensils, categorizing them into forks, spoons, or knives. She states that treating rosacea is like eating a meal – you can’t get by with just one utensil. While a spork would be a plausible loophole to this one-utensil-meal challenge, we don’t quite have a spork for treating rosacea (yet!).  So what exactly are the utensils that Dr. Harper explained?

Forks are medications that treat papules and pustules, including:

Spoons should be utilized for persistent background erythema, such as:

Next, Dr. Harper reviewed another JDD study (Stein Gold L, Papp K, et al. J Drugs Dermatol. 2017;16(9):909-916) that combined a fork and a spoon – ivermectin and brimonidine – to treat both moderate to severe erythematotelangiectatic and papulopustular rosacea. Three groups were identified in this study – one receiving vehicle only, one receiving ivermectin for 12 weeks with addition of bromonidine at week 4, and one receiving both ivermectin and brimonidine for 12 weeks. The most striking result from this study was that those who used combination therapy for 12 weeks had double the rate of improvement of redness in the three hours after brimonidine use. Dr. Harper explained that despite the use of a really good fork (ivermectin), there was still enough residual redness that the spoon (brimonidine) could make a meaningful impact. Thus, targeting inflammation and pustules alone will not lessen background erythema.