Pathophysiology and Management of Rosacea 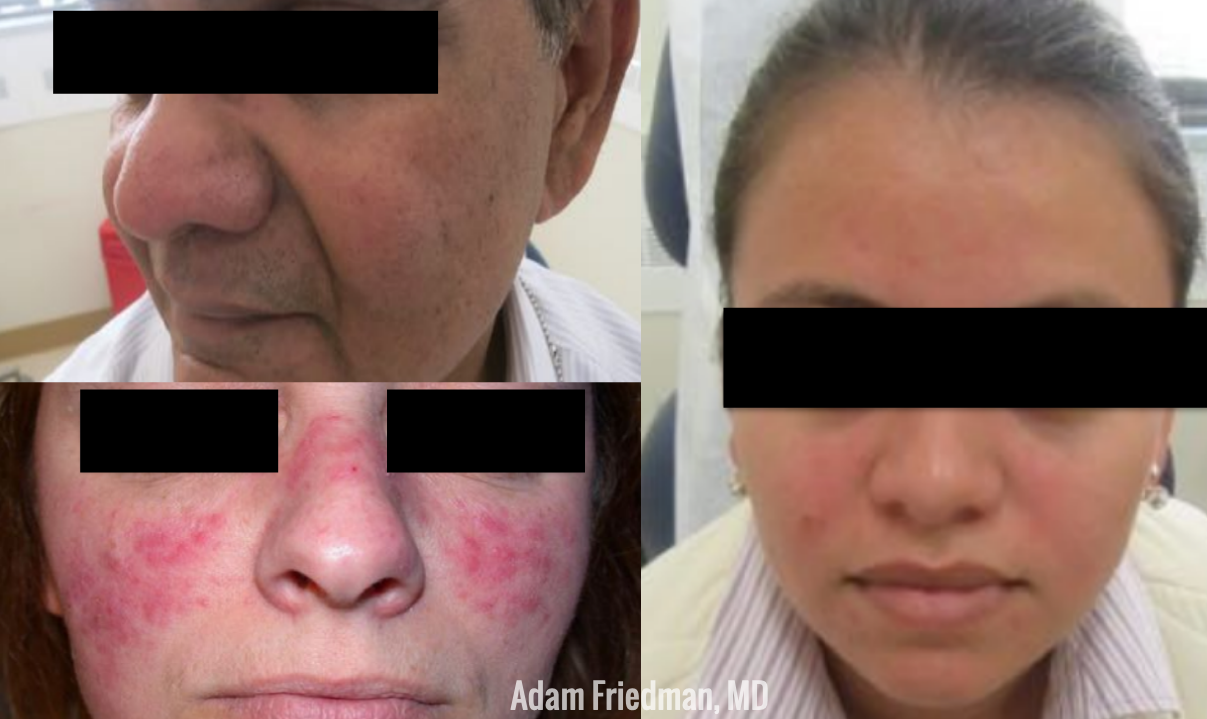 This information was presented by Dr. Adam Friedman at the 16th Annual ODAC Dermatology, Aesthetics and Surgical Conference held January 18th-21st, 2019 in Orlando, FL. The  highlights from his lecture were written and compiled by Dr. InYoung Kim.

If you’re a coffee drinker, you may be relieved to know that there was an inverse association between caffeine intake and risk of rosacea in a recent study.  That was a huge relief for me for sure! Unfortunately, we can’t prescribe caffeine for rosacea and call it a day. So, what works?

High-yield pearls on the pathophysiology and management of rosacea are shared by Dr. Adam Friedman – Professor and Interim Chair of Dermatology, Residency Program Director, Director of Translational Research, and Director of the Supportive Oncodermatology Clinic in the Department of Dermatology at The George Washington University School of Medicine & Health Sciences. Here are the highlights.

New Approach to Diagnosis and Categorization of Rosacea

First, let’s talk about diagnosis.  Rather than categorizing into 4 classic subtypes that we learned in the textbook, rosacea may be better defined by “phenotypes”.  Diagnostic phenotypes include 1) having fixed centrofacial erythema in a characteristic pattern that may periodically intensify or 2) phymatous changes.  In the absence of these, the presence of 2 or more major features may be diagnostic, including papules/pustules, flushing, telangiectasia, ocular symptoms.  Some secondary phenotypes that may help with diagnosis are burning/stinging, edema, dry appearance, and ocular rosacea.

Rosacea in Skin of Color – Rosacea Does Not Discriminate!

While rosacea has widely been considered a disorder selectively affecting the Caucasian population, this is not true! Perhaps due to this bias, delayed diagnosis has been reported in substantial numbers.  In fact, the prevalence of rosacea in skin of color is as high as 10%!  That is significant.  Please spread the word!  So how do they present differently than Caucasian patients? While you may not see the persistent facial erythema (which is common in whites), the granulomatous subtype and papules/pustules are more common in skin of color.  Asking about the secondary phenotypes noted above (burning/stinging, edema, dry appearance, and ocular rosacea) may also be helpful in diagnosis.

While many prescription treatment options exist (outlined below), patient education concerning proper general skin care is of utmost importance.  Make sure to include these in your counseling: daily sunscreen, gentle moisturizers, gentle cleansers, avoid triggers.

A list of FDA-approved topical therapies that you may choose from:

What would a typical daily plan look like for a moderate-to-severe rosacea patient?  Here are Dr. Friedman’s tips: 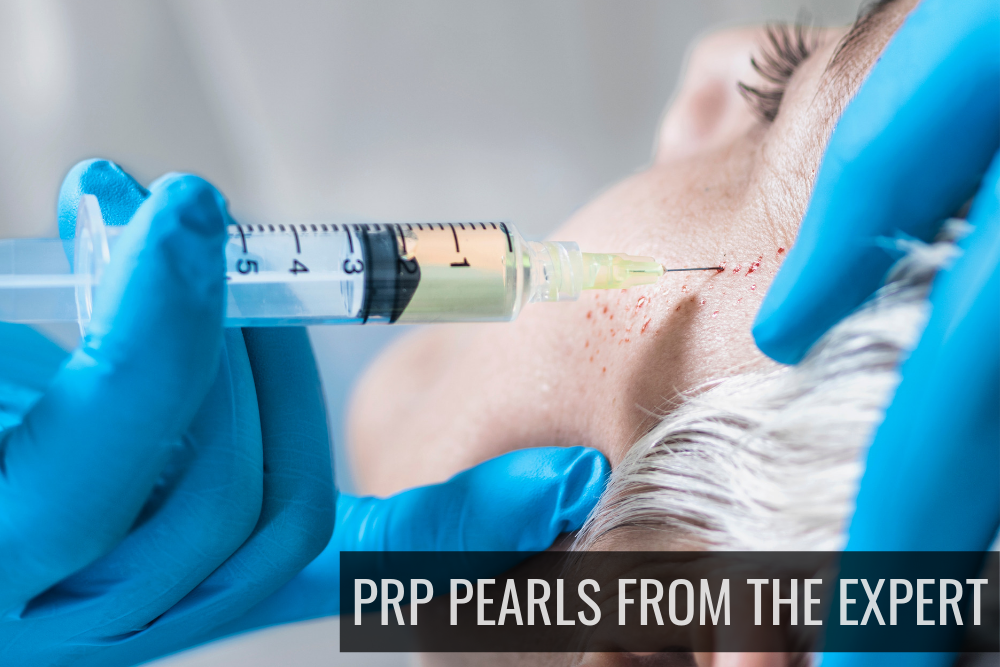 Dr. Deirdre Hooper, an expert aesthetic and medical dermatologist, discussed the emerging use of Platelet-rich Plasma in the treatment of alopecia and skin rejuvenation at the 16th Annual ODAC Dermatology, Aesthetics and Surgical Conference. Dr. Nikhil Shyam shares his takeaways and pearls from this lecture.

Platelet-rich plasma (PRP) is rapidly gaining popularity amongst dermatologists for its potential use in treating hair loss, acne scarring and facial rejuvenation. However, there is significant variability in the processing of PRP and there are currently no established treatment protocols.

Evidence for PRP in Treating Hair Loss and Skin Rejuvenation

Overall, PRP is increasingly being utilized for hair loss, scarring and facial rejuvenation. Currently, PRP appears to be safe with no long-term side effects noted. It may be used synergistically with existing treatment options with added benefit. Further research is required to establish the optimal PRP processing technique and to establish standardized treatment protocols. 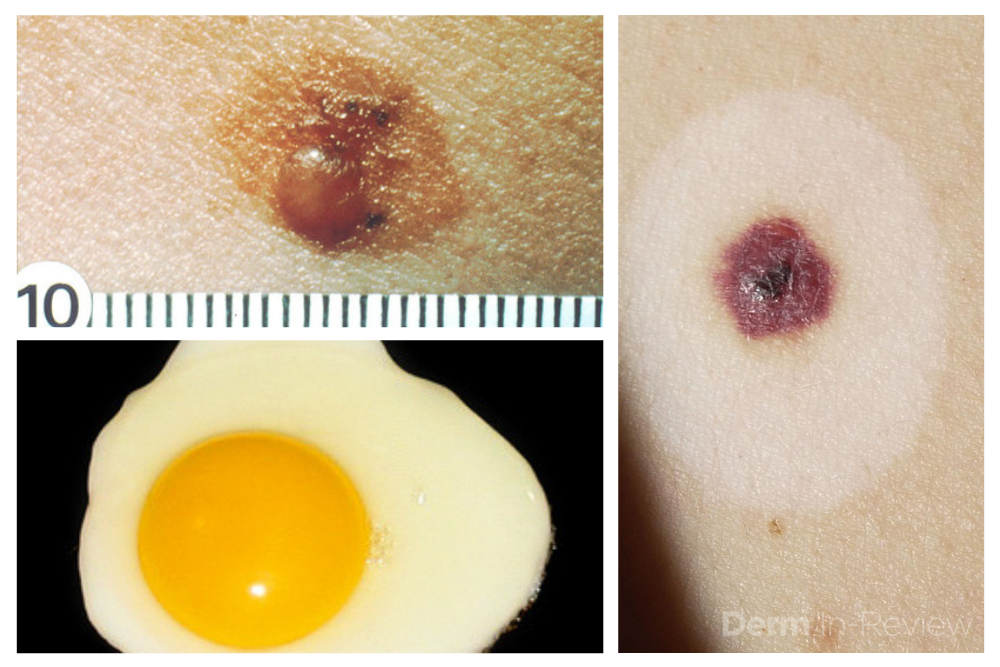 This information was presented by Dr. Jean Bolognia at the 16th Annual ODAC Dermatology, Aesthetics and Surgical Conference held January 18th-21st, 2019 in Orlando, FL.  The highlights from her lecture were written and compiled by Dr. Daniel Yanes.

Despite being one of the more common reasons for consulting a dermatologist, the diagnosis and management of atypical nevi remain nuanced and can often be challenging. I had the opportunity to learn from Dr. Jean Bolognia on her approach to atypical nevi, and walked away with many pearls to share.

1. Identify the patient’s signature nevus and come up with a plan.

Sometimes it can be overwhelming to know where to begin when tasked with the patient who has numerous and atypical nevi. The first step is to identify the patient’s signature nevus. Do they tend to grow fried egg nevi, eclipse nevi, or cockade nevi? Are their signature moles all pink with little brown pigment, or are they pitch black with a wafer of scale? Identifying the signature nevus assists in determining the ugly duckling, and it will also help you develop a practical approach. In addition, if the patient has primarily pink nevi, palpation for induration versus soft flabbiness is helpful as banal intradermal melanocytic nevi can be pink in color.  If the patient has primarily small flat black nevi, you should hone in on the presence of inflammation that is not simply due to acne or folliculitis. Creating an individualized plan is the key to a successful examination.

2. Nevi change, and sometimes it is simply an aging phenomenon.

In addition to identifying the signature nevus, it is also essential to understand how melanocytic nevi evolve over time. While nevi classically progress from junctional to compound and then to dermal, sometimes they simply fade away. In the case of fried egg nevi, the “yolk” becomes more raised and softer over time while the “white” of the egg gradually fades (figure 1). This results in multiple large dermal nevi on the trunk in an older patient. Patients can be taught that when a nevus elevates, determining if the lesion is firm versus soft can assist in distinguishing between the need for evaluation versus an aging phenomenon. Although not all changing nevi are concerning nevi, it is still essential to give the patient’s nevus of concern special attention, even if it doesn’t catch your eye at first.

Systemic Therapies for Melanoma: What Every Dermatologist Needs to Know 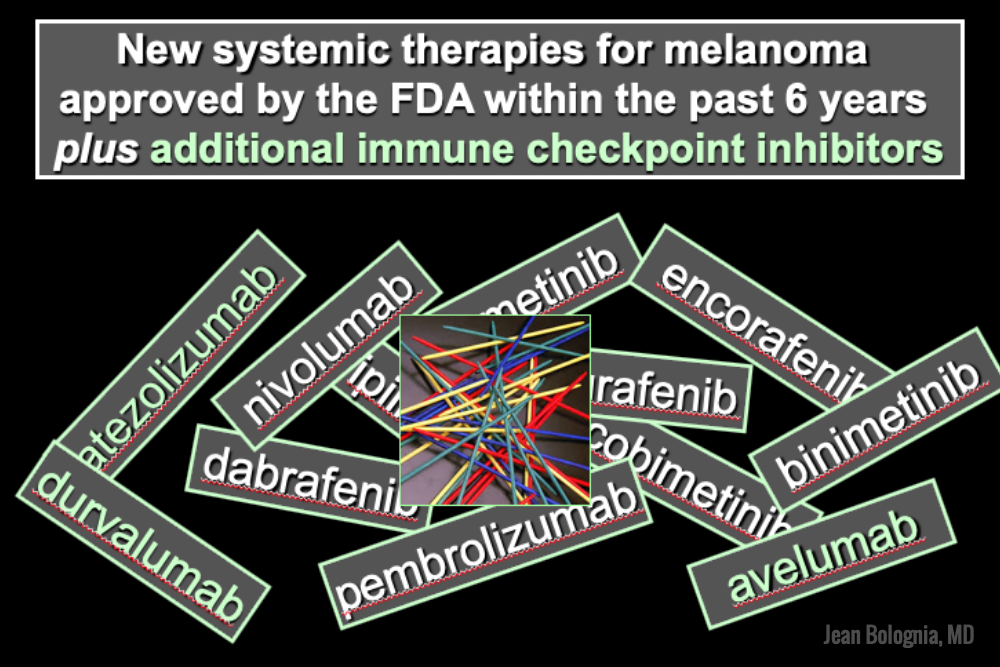 This information was presented by Dr. Jean Bolognia at the 16th Annual ODAC Dermatology, Aesthetics and Surgical Conference held January 18th-21st, 2019 in Orlando, FL.  The highlights from her lecture were written and compiled by Dr. Daniel Yanes, one of the 5 residents selected to participate in the Sun Resident Career Mentorship Program (a program supported by an educational grant from Sun Pharmaceutical Industries, Inc.). Dr. Yanes was paired with Dr. Jean Bolognia as his mentor.

The world of melanoma is evolving, and dermatologists need to be equipped with the knowledge to help their patients navigate this landscape. Newer therapies for patients with more advanced stages of melanoma have not only drastically improved survival, but we as dermatologists must be prepared to recognize and treat the cutaneous side effects of these medications. This is a brief summary of common systemic therapies for melanoma with which every dermatologist should become familiar.

Melanoma tumor cells often have activating mutations that lead to constitutive activation of the MAP kinase pathway (See figure). Such activation can then lead to unregulated cell growth and proliferation. The most commonly detected mutation in BRAF results in the substitution of glutamic acid (E) for valine (V) at the 600th position in the BRAF protein and is referred to as BRAF V600E. Selective BRAF inhibitors, e.g. dabrafenib, encorafenib and vemurafenib, specifically target altered BRAF proteins. You can easily recognize these medications from their names, with raf indicating they target (B)RAF and nib identifying them as inhibitors. They are administered orally and chronically and lead to rapid responses but unfortunately tumor resistance commonly develops, often within six months. There are cutaneous side effects that the dermatologist should recognize, including morbilliform and folliculocentric eruptions, UVA photosensitivity (e.g. vemurafenib), keratoacanthomas/squamous cell carcinomas, and changes in melanocytic nevi (eruptive, enlargement, involution).

When mechanisms of resistance to selective BRAF inhibitors were investigated, a common finding was re-activation of the MAP kinase pathway via activation of MEK, another kinase that is downstream from BRAF. MEK inhibitors, e.g. binimetinib, cobimetinib, trametinib, were then combined with selective BRAF inhibitors to reduce the development of tumor resistance. These drugs are identified by the presence of a -metinib suffix. Interestingly, compared to BRAF inhibitors alone, combination BRAF+MEK therapy is associated with significantly less, not additive, cutaneous side effects – a real benefit to the patient.

Immunotherapy is designed to stimulate the immune system to attack immunogenic melanoma cells. These monoclonal antibodies inhibit inhibitory signals that normally downregulate the immune system and thus act as immune checkpoints. These drugs model after the saying “the enemy of my enemy is my friend,” only it’s now “the inhibitor of the immune inhibitor is the immune stimulator.” CTLA4 is a receptor on regulatory T cells that plays an important role in diminishing immune responses. By blocking the inhibitory function of CTLA4 during the priming phase, the anti-CTLA4 antibody ipilimumab increases T cell immune activity. Peripherally, when the PD-1 receptor on T cells binds to its ligand, PD-L1, on tumor cells, an inhibitory signal results. In a similar fashion, the anti-PD-1 monoclonal antibodies approved for melanoma – nivolumab and pembrolizumab – can increase anti-tumor immune activity. Anti-PD-L1 monoclonal antibodies (e.g. avelumab, atezolizumab, durvalumab) have been approved to treat other malignancies, including Merkel cell carcinoma.